In the second of our In Focus series of objects, we celebrate works created by Horace Walpole’s beloved goddaughter, sculptress Anne Seymour Damer (1748 – 1828), who inherited the House upon his death in 1797.

Central to the new display is Damer’s marble bust of her mother, Caroline Campbell, Lady Ailesbury, thought to be made in the late 1780s. Along with a second marble bust, a Niobid, which was until recently thought to be lost and will be on show at the House for very the first time.

Born into a wealthy aristocratic family, Anne Seymour Damer was a rare and remarkable individual in male-dominated Georgian society, not only was she renowned as a gifted actor and writer but a successful, professional sculptress. Writing in 1780, Walpole noted just how unusual this was at the time, as he observed that Anne: “…has chosen a walk more difficult and far more uncommon than painting. The annals of statuary record few artists of the fair sex, and not one that I recollect of any celebrity… [but her] busts from the life are not inferior to the antique.”

It is also thanks to Walpole’s correspondence and writing, including his creation of the first catalogue raisonné devoted to her work that we know that Damer showed signs of her talent from an early age, that she trained with the Anglo-Italian sculptor Giuseppe Ceracchi and later with the modeller and carver John Bacon.

Such was his fondness for Anne and enthusiasm for her work, that he was prone to hyperbole, once comparing her to Bernini and Praxiteles of Athens. In his defence however, it is arguable that Walpole’s florid descriptions were motivated by a desire to see her talent recognised at a time when there was no great inclination to do so, in a male-dominated society and area of the arts.

At Strawberry Hill he housed what was probably the largest collection of Anne Damer’s works ever formed. It was comprised of twelve sculptures, of which four were wax medallions – in the style of the feted wax modeller, Isaac Gosset – along with four heads and four sculpted animals. Her sculptures were mainly located in the House’s private rooms, in which Walpole lived.

The central object in the new display is Damer’s marble bust of her mother, Caroline Campbell, Lady Ailesbury, probably made in the late 1780s. The bust – today owned by a private collector, was until recently on display in New York’s Metropolitan Museum. Campbell’s serene and composed expression evoke the ideals of ancient sculpture, a connection further echoed by Damer’s dual signatures in Latin and Greek. On the reverse, is a personal dedication of the work to her ‘friend and mother’. Damer kept this bust throughout her life and carved another version in Portland stone for her mother’s tomb in Saint Mary’s Church, Sundridge, Kent, where Damer herself is buried.

A second marble bust, a Niobid, which was until recently thought to be lost, can be seen at Strawberry Hill for the very first time. In Greek mythology, Niobid was one of Niobe’s daughters, who were slain by Apollo and Artemis after Niobe boasted of having more children than their mother, the goddess Leto. In his Book of Visitors, Walpole reported this was the first marble bust ever sculpted by Damer: “Bust of Niobe in marble. Her first attempt”, which is confirmed by the inscription on the back of the bust, ‘Opus Primum’, first work.

The Niobid head is a copy after one of the heads that compose the antique sculptural group of Niobe excavated in Rome in 1583 which Anne would have seen this during her Grand Tour to Italy. The bust appears less accomplished and mature than the later, idealized heads by Damer, of which the bust of Lady Ailesbury is an excellent example.

As part of the In Focus display, there is a chance to see a rare portrait of Anne as a sculptress, by John Downman (1750-1824). In his drawing, on loan from a private collection, we see her working on a bust of the Polish Prince Lubomirski, as the young Bacchus (the bust is today held at the Ashmolean Museum in Oxford). Downman’s portrait, dated 1793, represents Anne at the age of 43 and is the most detailed representation of her while at work.

Also featuring in the exhibition are the Portrait of General Henry Seymour Conway, Lady Ailesbury and Anne Damer by John Giles Eccardt (1754), commissioned by Walpole for the Blue Bedchamber, and a very unusual embroidered piece after Thomas Gainsborough, Two Beggar Boys, executed by Damer’s mother, whose needlework Walpole much admired.

Damer’s credibility as a sculptor was often questioned because of her lack of formal training. A measure of her ability and fortitude was that, despite her lack of training, Damer was nevertheless an honorary exhibitor at the Royal Academy between 1784 and 1818, showing over 30 works, and even made several public monuments, including an over life-size statue of King George III for Edinburgh Registry office, where it still stands.

When Horace Walpole died in 1797, he left Strawberry Hill to Anne and also money to keep the house, the collection and the garden in order. In 1798, she moved in with her widowed mother (living there until 1810) and had her studio installed in the Printing House. She carefully annotated any change in the collection display and kept showing the house to occasional visitors.

During her life, Anne Damer challenged gender roles not only in relation to her artistic environment, but in many other ways. Her intense relationships with women in her circle, from actress Elizabeth Farren to author Mary Berry, were often the subject of gossip, while contemporary sources referred to her as a ‘Sapphist’. Jibes were also made about her so-called ‘masculine’ pursuits, as the diarist Joseph Farrington observed: ‘the singularities of Mrs Damer are remarkable — She wears a Mans Hat, and Shoes, — and a Jacket also like a mans — thus she walks about the fields with a hooking stick…’.

She continued to sculpt until the end of her life, dying aged 79, in 1828 at her Mayfair home. She was buried at St. Mary’s, Sundridge, Kent in the same church as her mother. It is said that in her will, Anne requested that her letters be destroyed and that she be interred with the bones of her dog and her sculpting tools.

Access to the display is included in the general admission. 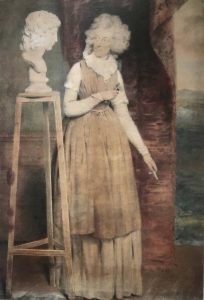