The sewing bee was set up in 2011 to make historical costumes for children to dress up in when visiting the house. Since then the group has grown to help recreate Robert Walpole’s bed, completed in 2019 and costumes from portraits at the House, including a stunning dress based on the Joshua Reynolds portrait of the Three Ladies Waldegrave, both finished items are now on display in the house. From the very beginning, the Bee has welcomed needleworkers of all abilities to come and learn from each other.

If you are interested in helping with these exciting projects please contact Claire Leighton by email at Claire.leighton@strawberryhillhouse.org.uk

The Bed in the Blue Bedchamber

After an immense labour of love, a wonderful replica bed has now been completed. Pam Crisp and Hazel Dolton are members of our Sewing Bee team of volunteers and they recount their story.

Horace Walpole described his bed, which he placed in the Blue Bedchamber, as a chintz day bed; it was one of Horace’s prized possessions and one of the first pieces of furniture installed in Strawberry Hill. It is reputed to be the bed in which his Father died.

Several years ago, the Trust decided to create a replica bed, to be based upon George II’s bed. This is on display at Hampton Court and is of the right style and era for the original. The new bed frame was made by students at the London Metropolitan University as part of their coursework.

In the summer of 2014, members of the Strawberry Hill Sewing Bee were approached to create the soft furnishings for the bed. All of the sewing was to be done by hand following 18th century techniques. This was a rather daunting prospect as none of the members had done anything like this before.

The first step was to construct the mattresses; these were made from artificial horse hair covered in hessian. Next came the quilt which is covered in linen similar in look and texture to 18th century cotton, with a wool ‘tammy’ backing and a filling of polyester wadding rather than wool, to avoid moth attack.

The design for the quilt was copied from an original dating from 1700 that is in the V&A collection. Acetate templates were made from tracings of the photographed original and these were drawn around to transfer the design to the linen. The three layers of fabric were then mounted on a large quilting frame, where four people could sit to quilt side by side. A gold quilting thread and a simple tensioned running stitch created the pattern.

Quilting started in January 2015 and, after 648 hours of work, finished in January 2016. The edges of the quilt were then finished with a narrow silk binding. The pelmets, valances and curtains were made of glazed chintz lined with blue silk. The pattern for the chintz was copied from an original 18th century Palampore, also in the V&A collection. Palampores were large hand painted panels of Indian cotton, some made for the European market, which were cut to make bed hangings. The digitally printed chintz was produced in sections as the original was too large to recreate.

Valances and pelmets were made from stiff buckram lined with plain white cotton and then finished with the border pattern of the palampore backed with silk. The edges were bound with blue silk braid. Construction of the four curtains started with the seaming together of the separate pieces of chintz. Pattern matching and sewing long straight back stitched seams were quite a challenge.

The next step was to attach interlining to the chintz and then back it with silk that had been seamed together in widths as per 18th C hand loomed fabric; the finished pieces were all edged with silk braid. All the hangings were then trimmed with silk fringe which has been hand knotted, with all 28,000 knots at the same height and knotted the same way round! The head cloth at the back of the bed was made from the central field of the palampore pattern and the tester (roof) is made of blue silk, which is very difficult to seam neatly.

Finials complete the top of the fourposter. These are covered with very carefully trimmed pieces of chintz pattern glued into place. The project was finally completed in December 2019 after 5 years of work, during which the Bees learnt many new skills and are most grateful to Eileen Reay, a professional in the creation of historic textiles, who has guided and supported us throughout.

With thanks to Pamela Crisp and Hazel Dolton for sharing their account and all of the Volunteer Sewing Bees. 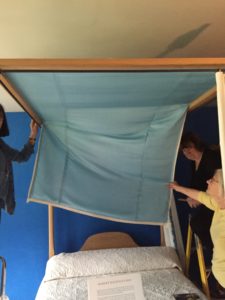 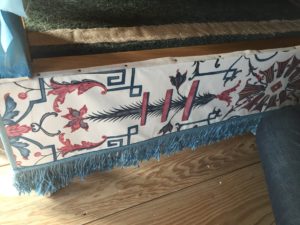 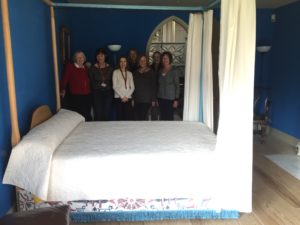 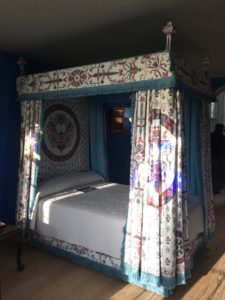