The remarkable life and legacy of Grinling Gibbons (1648-1721) will be celebrated at Compton Verney, as part of a year-long series of events to commemorate the tercentenary of the most renowned British woodcarver of the 17th century, often called the ‘Michelangelo of Wood.’

Gibbons carved with an unsurpassed realism that could literally fool the eye. One of the finest examples is a limewood cravat (c.1690, Victoria & Albert Museum) once owned by Horace Walpole and recently seen in the Lost Treasures exhibition. Exquisitely carved to imitate Venetian needlepoint lace, the Cravat was so realistic it is said that when Walpole wore it to greet visitors at Strawberry Hill House, they believed it was the real thing. By placing the cravat in the glazed niche next to the cabinet and his ‘altar’ in the Tribune, Walpole emphasised the importance of this object and the high regard that he held for the work of Gibbons.

Horace was familiar with Gibbons work from an early age; Sir Robert Walpole owned a portrait of Gibbons by Sir Godfrey Kneller and in 1736 it was hung at Houghton Hall, framed with a carved garland by Gibbons. The painting was later sold to Catherine the Great and it is now at the Hermitage; the garland remains in place at Houghton. In 1752 Walpole visited Herstmonceux Castle in Sussex, travelling on roads that were ‘bad beyond all badness’ but on reaching his destination he found ‘delightful carvings by Gibbons, particularly two pheasants’.

Walpole commissioned a portrait of his parents by John Giles Eccardt and John Wootton; it was completed in 1754, secured in an elaborate carved frame and hung in the Blue Bedchamber at Strawberry Hill. The frame was recycled from an earlier picture and Horace firmly believed it was by Grinling Gibbons, although it is not now reckoned to be his work. The painting of his parents was sold in 1842 and is now in the Lewis Walpole Library, Yale University. A modern replica was created in 2016 with the frame made from a nylon-based plastic material using 3D printing; it hangs in the Blue Bedchamber and visitors are amazed by the quality of the reproduction.

The cravat was a present to Walpole from his friend Grosvenor Bedford. Horace had commissioned a portrait of himself (1756-7) by Sir Joshua Reynolds and gifted it to Bedford; it is now in the National Portrait Gallery. Today this looks like present giving on a heroic scale, but it was unexceptional for 18th century aristocrats. Walpole was now in a position to shock his French visitors to Strawberry Hill in 1769 and he wrote ‘At the gates of the castle I received them, dressed in the cravat of Gibbons’s carving, and a pair of gloves embroidered up to the elbows that had belonged to James I. The French servants stared, and firmly believed this was the dress of English country gentlemen’.

It was at this period that Walpole wrote Anecdotes of Painting (1762-1771) in which he described Gibbons as “an original genius, a citizen of nature”. His work is usually only seen in palaces, cathedrals and the grandest of stately homes but, in this tercentenary exhibition, fine examples can be seen together, including items rarely on public display, curated from national, international, and private collections. Centuries in the Making explores the influences that shaped Gibbons’ vision, skills and technique and the stylistic and cultural impact that he had on this country. The exhibition, includes an abundance of objects he made. A fine draughtsman, his designs for a canopied bed, a chimney piece and monument to Queen Mary II (1662-1694) demonstrate Gibbons’ creativity and the breadth of work he was commissioned for. Details can be found at:

The exhibition showcases the virtuoso cravat in such a way that visitors can get a 360-degree view of this fabulous piece. Speaking for myself, I am definitely going! 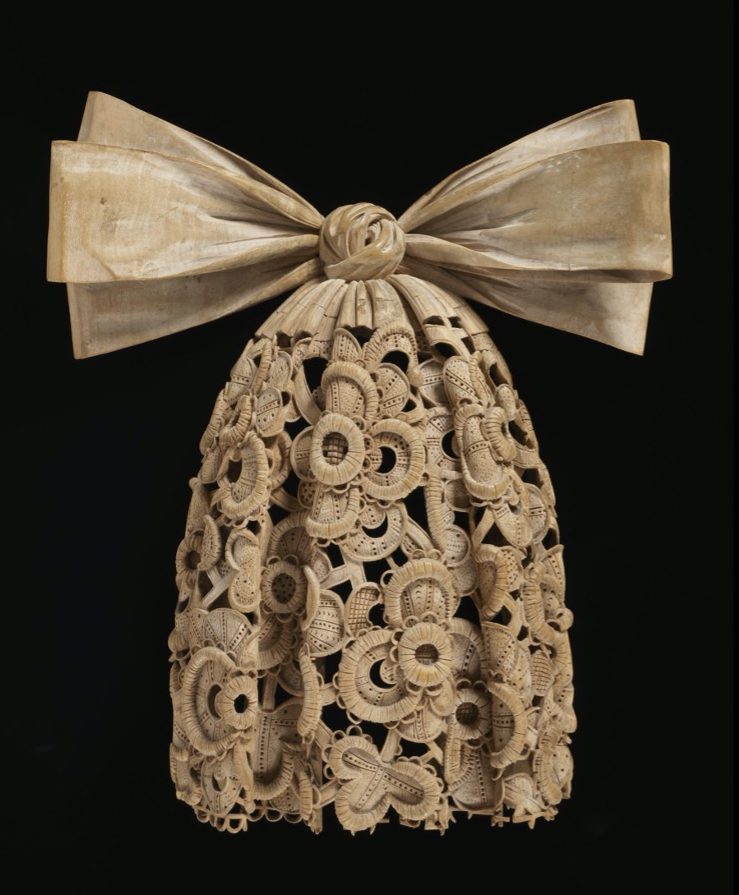