Are you the mystery owner of the missing Gothic Table?

Are you the mystery owner of the missing Gothic Table?

Launched on 18 October at Strawberry Hill House, the ‘Lost Treasures of Strawberry Hill’ exhibition is now open to the public to explore and immerse themselves in Walpole’s world of darkly glamorous ‘gloomth’. The opening of the exhibition marks an exciting new chapter in our series retracing the treasures from Walpole’s lost collection. In this tenth instalment, art historian and provenance researcher, Silvia Davoli, appeals to a mysterious guest who attended the opening night of the exhibition, claimed to own a missing gothic table, which once sat in the Great Parlour at Strawberry Hill and disappeared without a trace.

Opening night of the ‘Lost Treasures’ exhibition finally arrived and I was overcome by the transformative effect that my years of tireless detective work had on Walpole’s fantasy gothic revival castle. Starved for so many years of the sumptuous collection of paintings, drawings, furniture and curiosities that had entertained countless visitors and inspired haunting literary tales the house has metamorphosed into a feast of colour and ornament.

There in the Great Parlour sits the glittering Limoges hunting horn enameled in emerald green and blue (1538). It is watched over by Walpole’s great nieces, ‘the Ladies Waldegrave’ (1780-81), portrayed by Sir Joshua Reynolds as three elegantly coiffed Fates tending to their needlework. Nestled artfully inside the niches of the bijou Tribune are the bronze sculptures of the Apollo Belvedere and Venus of Medici after the antique. Turning the corner into the great Gallery with its sparkling arbour of gilded relief-work I am met by John, 2nd Baron Sheffield, painted by Antonis Mor and surveying the crimson damasked space from behind the barbed points of his ginger beard.

Over 5 years of investigative provenance research I have returned more than 100 objects to their former home in Walpole’s fantasy villa. Yet, hundreds more remain at large and I could not help but think of these orphaned items even as my guests toasted my success on opening night. How could I have known that one guest among them might provide the missing link to another long-lost treasure of Strawberry Hill and bring me ever closer to completing its renaissance as Walpole’s former home?

Walpole’s so called ‘Gothic Table’ has eluded me for several years despite my fervent searching. Once housed in the Great Parlour at Strawberry Hill, it is described in Walpole’s 1774 inventory ‘A Description of the Villa’ as a ‘table of Sicilian jasper, on a black frame’ designed by Richard Bentley, who together with Horace Walpole was also responsible for the chairs and the mirror in the same room. When I consult the 1842 Great Sale catalogue, it is referred to with more flourish as a ‘Truly Splendid Table in the Gothic Style, the top of Sicilian Jasper, of the rarest kind… with 8 twisted legs’ and as ‘perfectly unique’.

The drawing of the side table, which is exhibited in the Library at Strawberry Hill as part of the ‘Lost Treasures’ exhibition captures its exquisite design. The frame evokes the kind of ornate tracery you would expect to support the glass in a gothic arched window. It sits atop the legs which twist like tree roots inching their way into the earth. Armed with this detailed drawing and the descriptions from Walpole’s inventory and Great Sale catalogue I set about searching for further evidence of the untraced table in the archives of the Lewis Walpole Library some years ago.

I discovered that the last known buyer of the table was a ‘Norton’, who purchased it for £19.19 at the Great Sale of 1842 but found no further clues beyond this date. Just when I thought I had plumbed the depths of the archive to no avail I uncovered a fascinating series of letters between British bibliophile, Harry Bradfer-Lawrence, and American bibliophile and antiquarian, Wilmarth Sheldon Lewis, who was particularly interested in Horace Walpole Wilmarth Lewis was in fact the founder of the Lewis Walpole Library and facilitated the publication of Walpole’s correspondence. It was Bradfer-Lawrence and Lewis’ correspondence, penned in the 1950s-60s, that led me to believe I had finally picked up ‘Norton’s’ trail.

The object of the correspondence was Bradfer-Lawrence’s collection of Walpoliana. Bradfer-Lawrence owned a few manuscripts and a gothic table of Sicilian jasper designed by Richard Bentley, which was said to have formed part of Walpole’s collection at Strawberry Hill. The proof was in a letter to Lewis, dated 26 October 1953, from the Managing Director of specialist book dealer, Maggs. Writing on behalf of his client ‘a Mr. Bradfer-Lawrence… Lord of the Manor of Several Districts in Norfolk’, Maggs refers specifically to ‘Horace Walpole’s Dining Table’. With its ‘proper pedigree’, Maggs also confirms that the table is one ‘with which [Bradfer-Lawrence] has not any intention of parting’.

There it was. The missing table, one of the highlights of the Walpole collection in the 18th century, dropped in as a casual afterthought in a yellowing letter whose main focus was a sale enquiry about a book of swan marks. Energised by this tantalising new clue, I sought out any remaining trace of the Bradfer-Lawrence family’s collection. I did not have to look far, as the family trove of documents and manuscripts was bequeathed to the Yorkshire Archaeological & History Society and the Norfolk Record Office, with a few manuscripts also left to the Fitzwilliam Museum. Of course, I was most interested in the family collection of furniture and I soon discovered that it remains with the family to date.

Giddy with the thought that another lost treasure was just within my reach I made contact with the Bradfer-Lawrence family. I received only half the answer I wished for:

Yes, came the reply. The family did in fact possess a table, which was once housed at Strawberry Hill.

No, it was not the enigmatic gothic table of Walpole’s description nor of the sale catalogue entry. The description I received from the Bradfer-Lawrence of their table simply did not correspond with mine and I was back to sleuthing for the descendants of Mr ‘Norton’.

The opening night of ‘Lost Treasures’ arrived and I joined in the celebration of the return of missing artefacts which had finally found their way back to Walpole’s make-believe ancestral castle. Meanwhile I pondered the very many more objects unaccounted for and whether they would ever see the walls of their former home again. How fitting then that in the place which inspired the creation of the very word, ‘serendipity’, a guest at the opening would happen upon the drawing of the gothic table displayed in Walpole’s library and recognise it as his or her own.

If you attended the opening night of the Lost Treasures of Strawberry Hill, and told a gallery assistant that your family owns Walpole’s gothic table as well as a chair, which once lived at Strawberry Hill House, I would dearly love to hear from you.

Help us to pinpoint the whereabouts of these lost treasures and complete the restoration of Strawberry Hill House.

If you are the mystery guest or you have any further clues that might assist us in locating the last of the lost treasures, get in touch with us to let us know via treasurehunt@strawberryhillhouse.org.uk. Happy hunting and we look forward to welcoming you to the ‘Lost Treasures of Strawberry Hill: Masterpieces from Horace Walpole’s Collection’, on now at Strawberry Hill House until 24 February 2019. 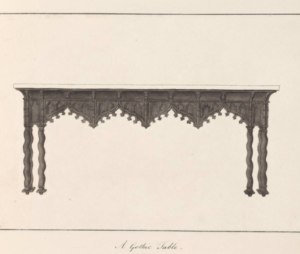 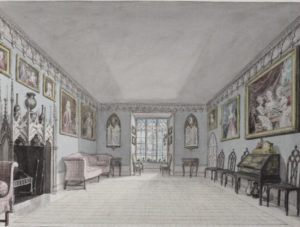 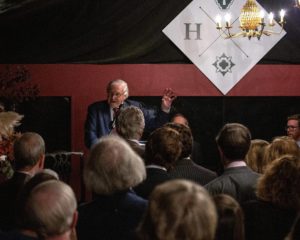 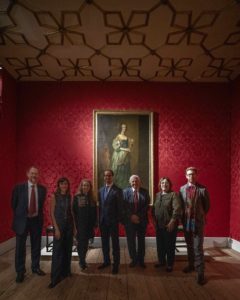